How is esophagus (Swallowing tube) is replaced by colon (large bowel) or jejunum (small bowel? When is it indicated? 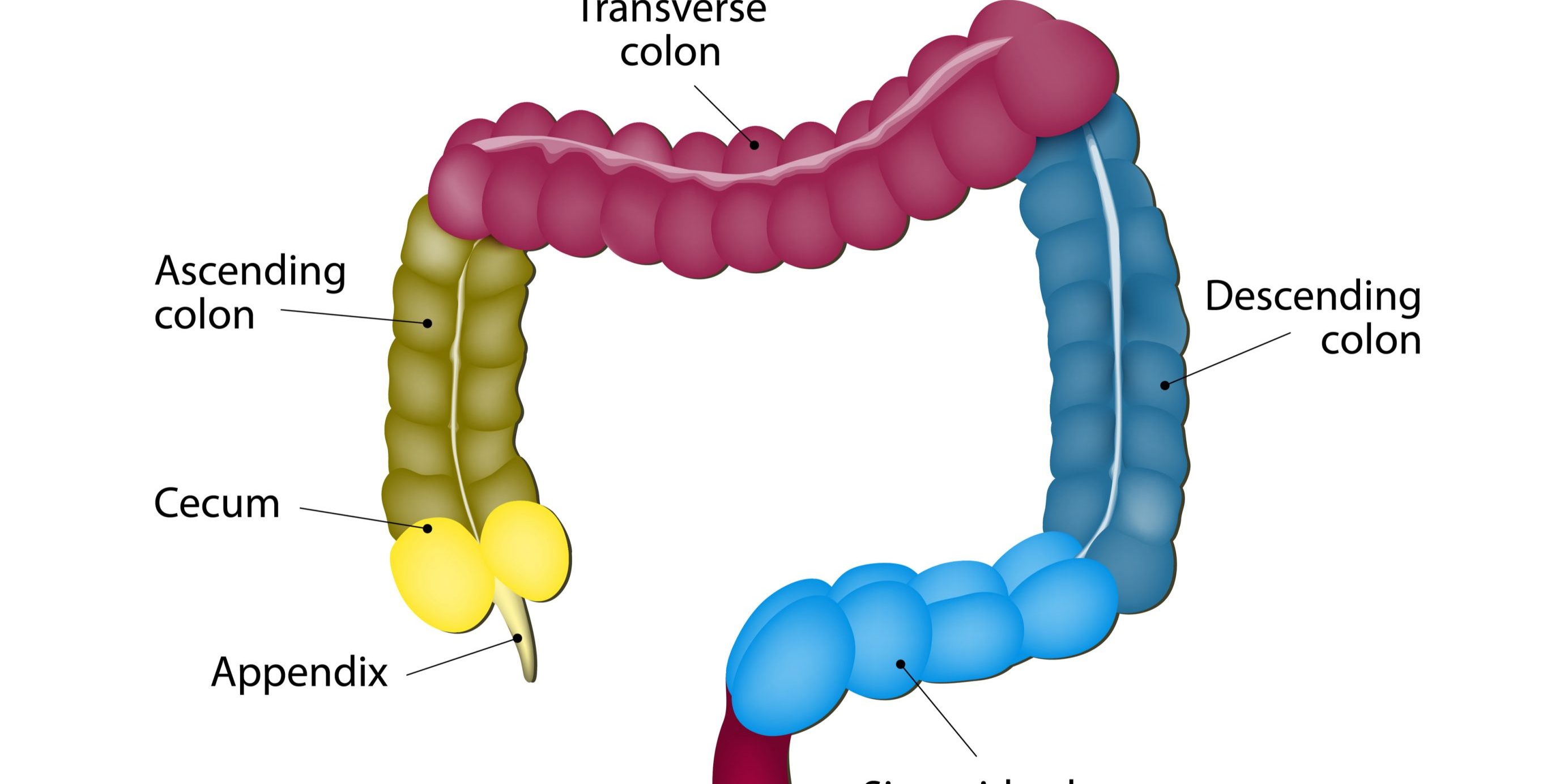 When we remove part of the esophagus it is necessary to make a new one. Cutting a segment of it and suturing the ends together does not work in esophagus and is not applied.
We frequently use stomach as a tube tube for esophageal replacement, but in certain situations, small or large bowel can be used.
Jejunum (Small Bowel):
It is usually used to replace the defect in the neck region following removal of tumors in the beginning of the esophagus. A healthy loop of jejunum is chosen (Figure 1) 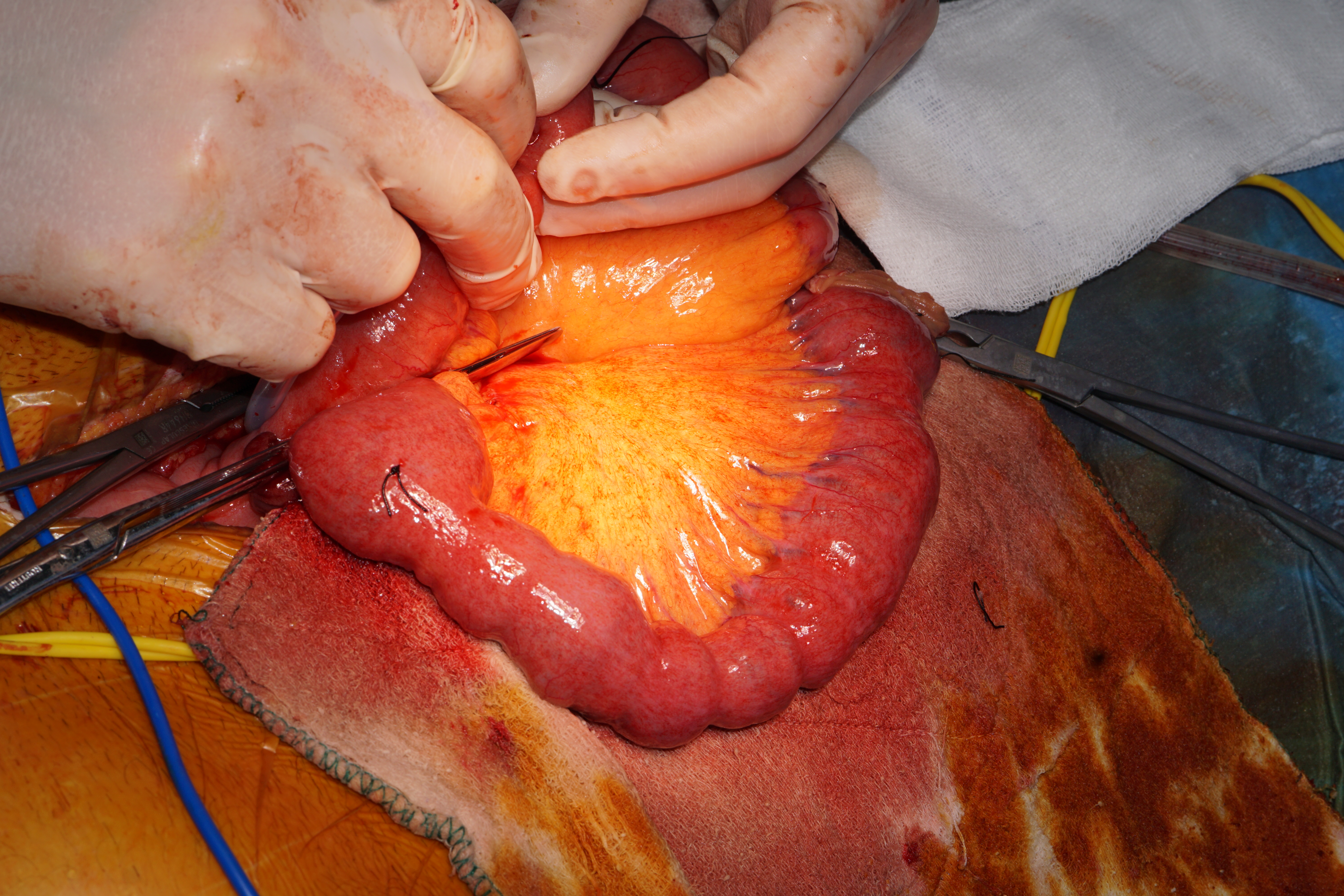 and placed in the neck region as a transplanted organ (Figure 2). 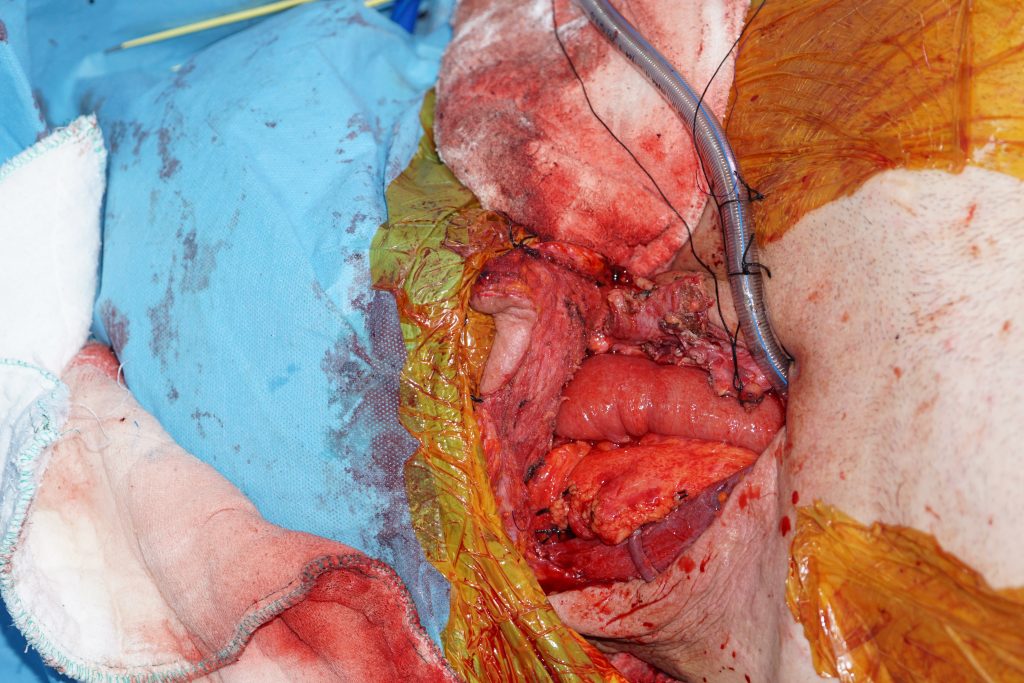 Upper end of the jejunum is sutured to the pharynx and the lower end is sutured to the esophagus at the entrance of the chest. Afterwards patients can start feeding orally.
Jejunum can be used in other situations as well. Such as;
If there is a non healing hole between esophagus and trachesa (windpipe),
If there is a chronic fistula in the esophagus following laryngectomy and speech device insertion,
If a tumor is located in the entrance of the stomach and the whole stomach plus lower end of the esophagus are removed.
As jejunum has a similar diameter with esophagus, it is an excellent replacement organ. There are not many centers nationally and internationally experienced in jejunal transplantation for esophageal replacement. This surgical procedure is a teamwork and esophageal and microsurgeons work together.
Colon (Large Bowel):
In certain situations colon is used to replace the esophagus. (Figure 3). 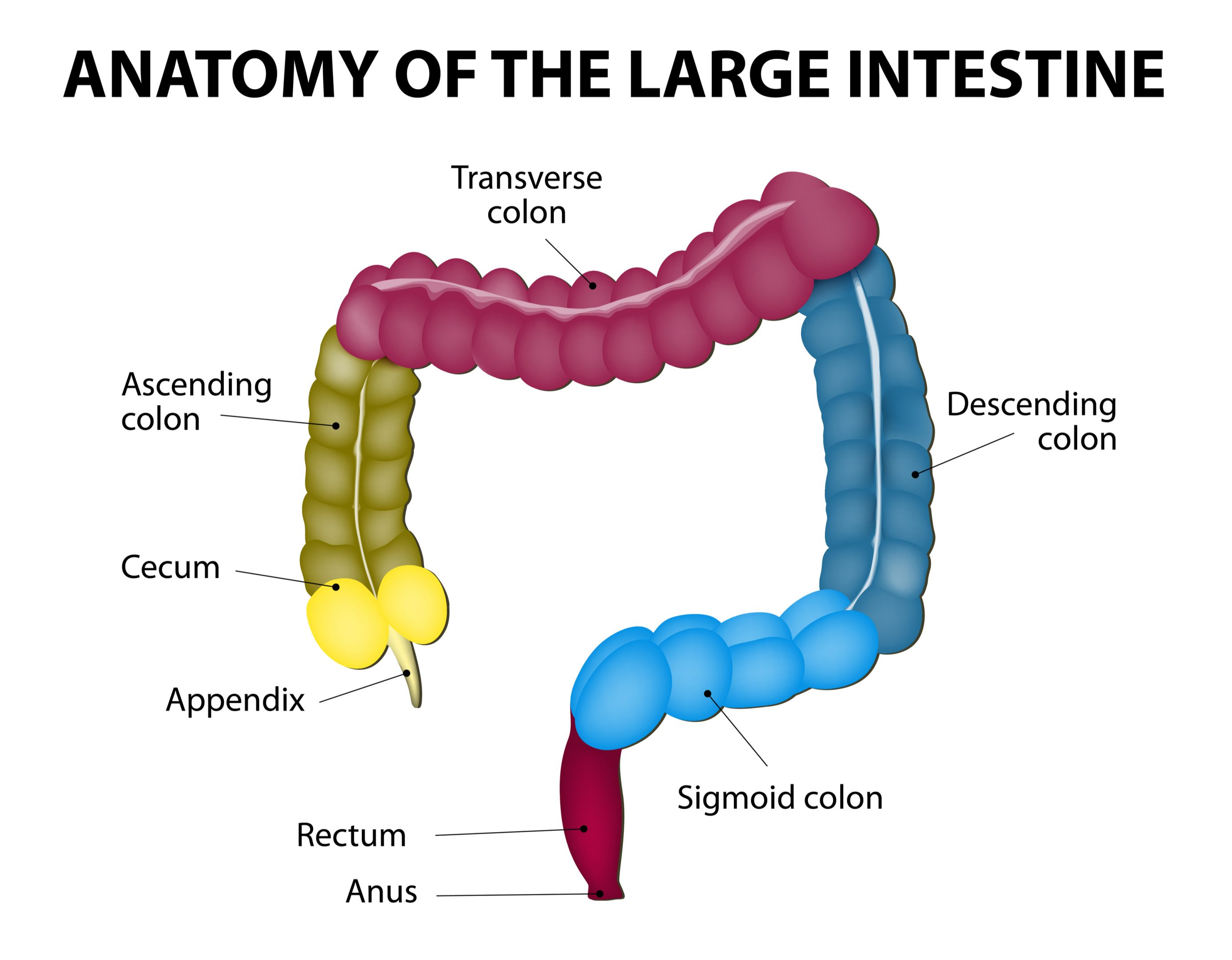 It is rarely indicated but colon is a suitable organ for long term (many years – even decades) replacement of the esophagus. Most commonly used part is the left side.
Colon replacement for esophagus is used when;
Stomach has been removed or operated on,
If esophagus is injured secondary to chronic reflux or caustic injury especially during childhood,
If we need to protect stomach in long term.
If left side of the colon is used, it is possible to remove the whole esophagus and replace it with colon until the neck. You can see an esophagus 3 months after caustic injury (Figure 4). 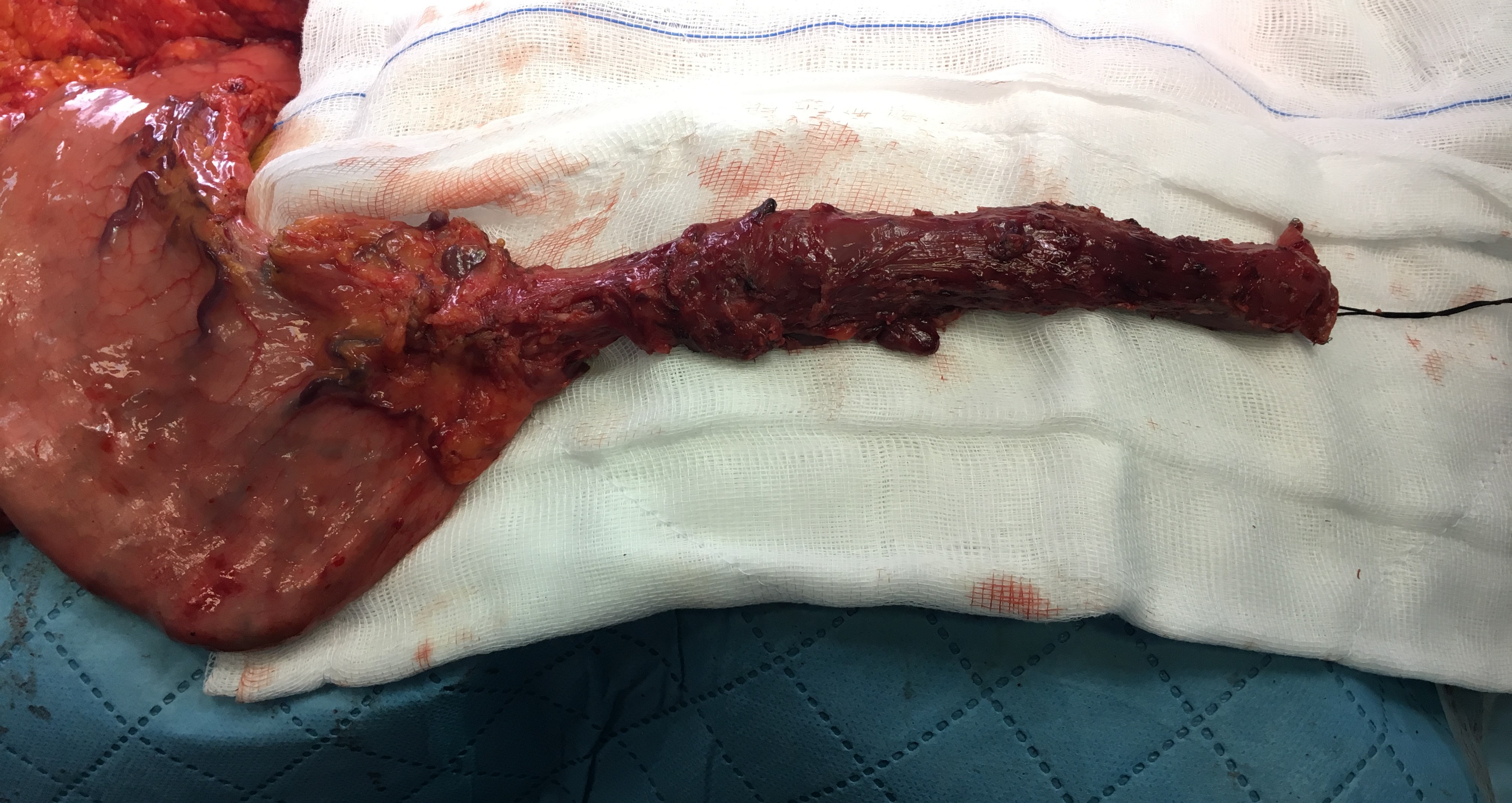 ). In this patient, we removed 90% of the esophagus and part of the stomach and replaced it with a long colon segment (Figure 5). 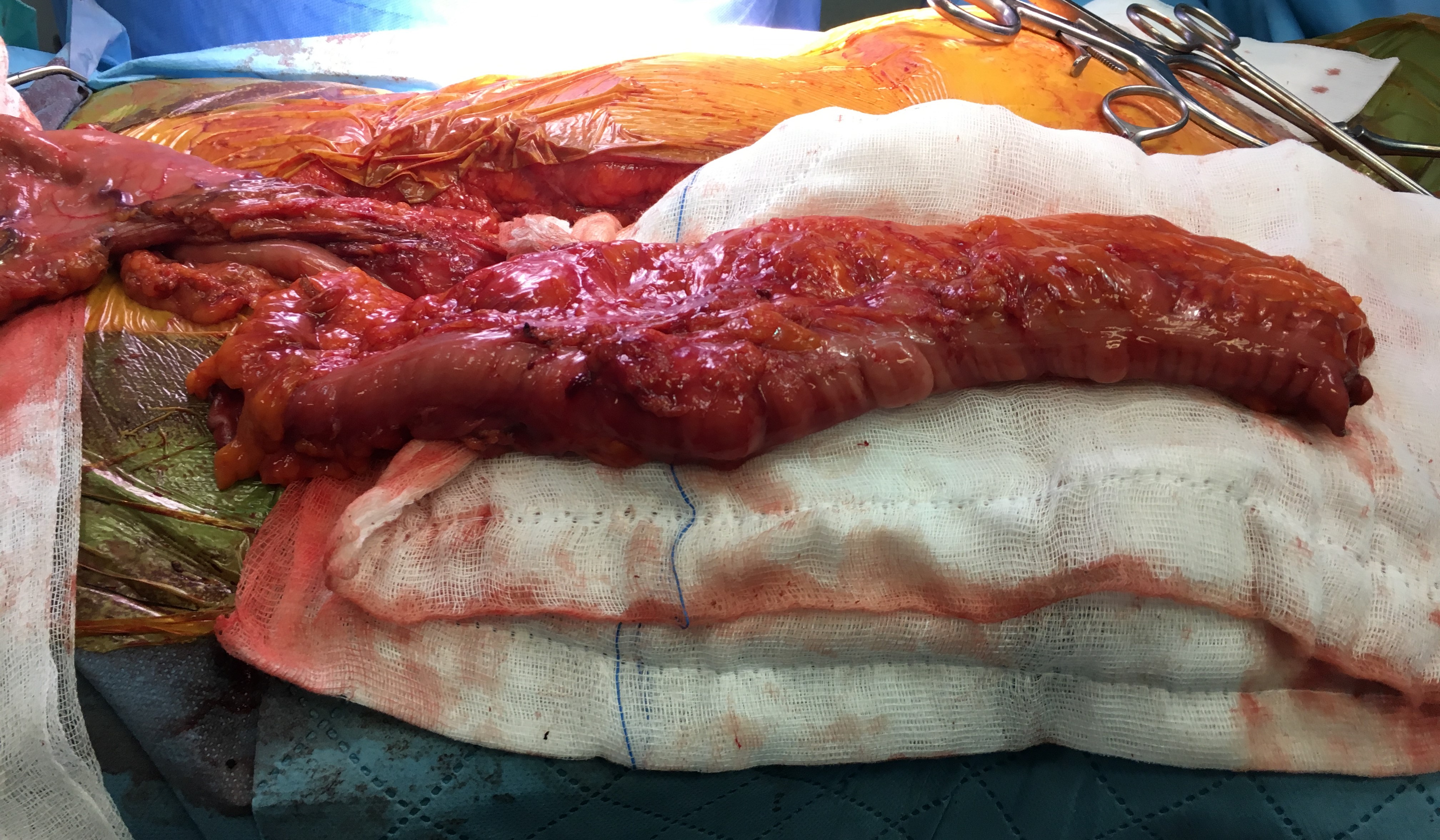 You can see the video of a patient with a chronic hole between esophagus and windpipe who had free jejunum replacement of upper half of the stomach from the neck till mid-chest. Despite the magnitude of surgery, the patient healed well and started feeding orally and gained 15 kg in six months (Video 1).

In the second video, you see the endoscopy of a patient who had a colon replacement in the chest which was passed through a tunnel in front of the heart and big vessels. The patient is feeding normally and gained weight about one year after surgery (Video 2).

You can also see the chest x ray and contrast substance in the colon which was used to replace the esophagus (Figure 6). 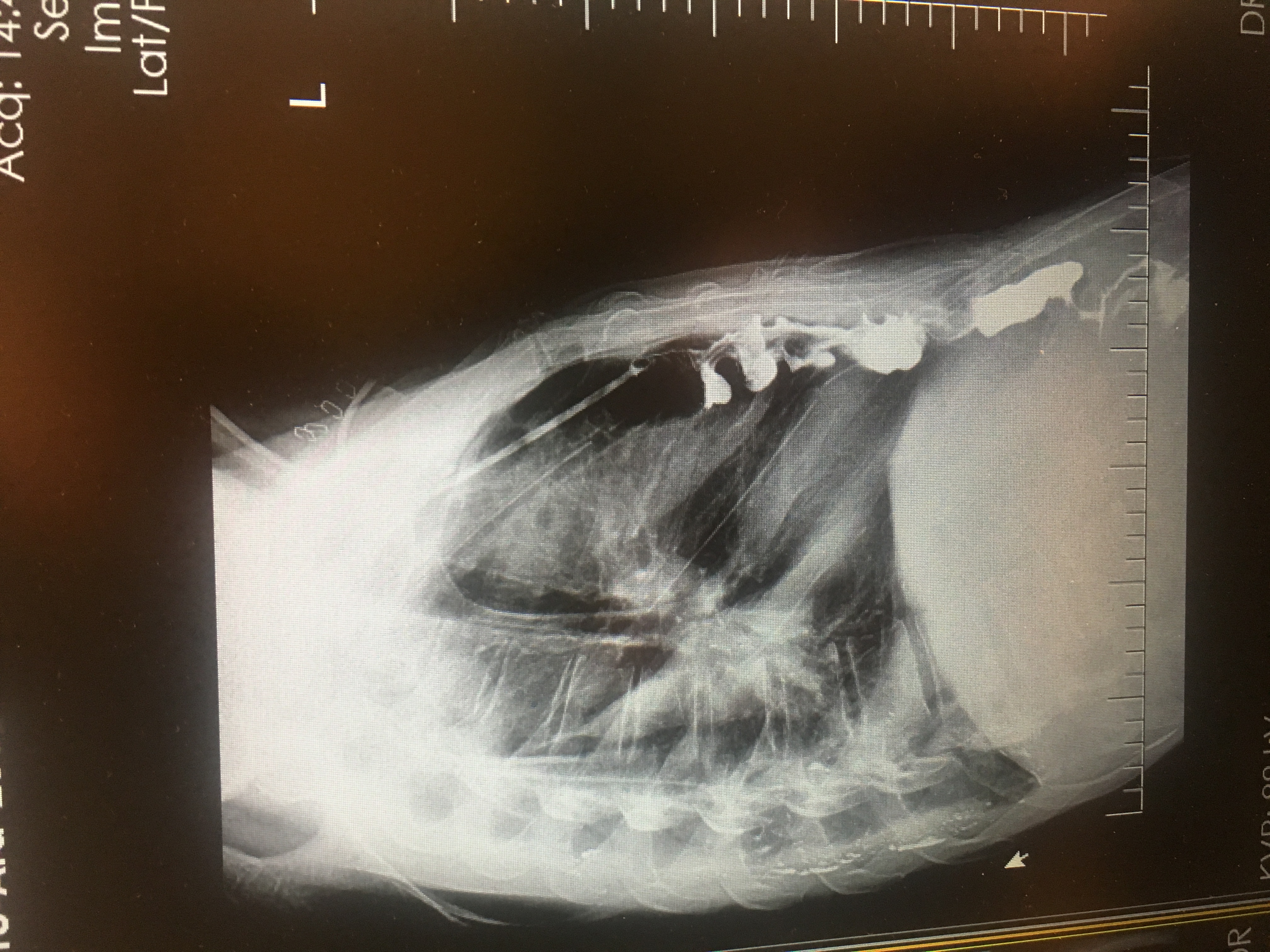 How do early lung cancers appear? How are they treated? What are the steps of treatment?
14 Ekim 2019

This website uses cookies to improve your experience while you navigate through the website. Out of these, the cookies that are categorized as necessary are stored on your browser as they are essential for the working of basic functionalities of the website. We also use third-party cookies that help us analyze and understand how you use this website. These cookies will be stored in your browser only with your consent. You also have the option to opt-out of these cookies. But opting out of some of these cookies may affect your browsing experience.
Necessary Always Enabled
Necessary cookies are absolutely essential for the website to function properly. These cookies ensure basic functionalities and security features of the website, anonymously.
Functional
Functional cookies help to perform certain functionalities like sharing the content of the website on social media platforms, collect feedbacks, and other third-party features.
Performance
Performance cookies are used to understand and analyze the key performance indexes of the website which helps in delivering a better user experience for the visitors.
Analytics
Analytical cookies are used to understand how visitors interact with the website. These cookies help provide information on metrics the number of visitors, bounce rate, traffic source, etc.
Advertisement
Advertisement cookies are used to provide visitors with relevant ads and marketing campaigns. These cookies track visitors across websites and collect information to provide customized ads.
Others
Other uncategorized cookies are those that are being analyzed and have not been classified into a category as yet.
SAVE & ACCEPT